Can't find what you're looking for and need answers to some questions? Feel free to contact us and a team member will respond shortly.

Restorations
La Jolla Independent is a world-renowned BMW Restoration Service facility. Please check out our Restoration Section for the latest information, upgrade tips, picture galleries, and our featured restorations in progress. We take great pride in breathing new life into the wonderful BMWs of the past 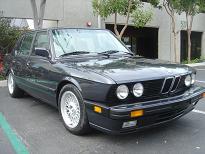 Carl Nelson has been involved with BMWs since BMWs have been involved with the US automobile market.  While obtaining his PHD in Geology, Carl used his mechanical skills to make money while pursuing his studies.  Initially he started with Volvo until he came across the BMW 1800ti, a car that defined the term ’sport sedan.’  Since the early 70s Carl has been the go-to information and technical knowledge bank for the BMW Car Club of America, Motor Trend, Car and Driver, Bimmer Magazine, the New York Times as well as others.  Whenever he’s not surrounded by rare parts and cars, Carl enjoys spending time with his family, competitive sailing, and working on his home’s garden which achieved 1st runner-up in the prestigious Clairemont Garden Tour.